During the POM June 2020 Meeting, in addition to the Twitter-based virtual poster session, some of the posters were selected to be discussed in a virtual reality room. VR was a new experiment for POM, and was tested only on a selection of posters.

The meeting featured three small-scale poster sessions in virtual reality (VR), using Mozilla Hubs. Three virtual rooms were set up with three posters each, selected by the Poster Committee. Each room allowed up to 15 people, who could mingle with each other and the poster presenters, just like in a physical conference.

If you would like to try Hubs during a future POM event, we strongly encourage you to read our instructions here below and try out the environment with some friends and colleagues in advance, to make sure everything goes smoothly at the actual event.

We thank Ariel Levenson for introducing us to the Mozilla Hubs platform. 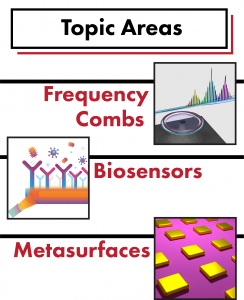 Looking forward to the next #POM21ja! We will discuss the relevance and potential of #photonic biosensors for an early and rapid medical #diagnosis. Hope to virtually see you there! 🧐👩‍💻

Canadian🇨🇦 #Optics and #Photonics students! We are hosting the Canadian @PhotonicsMeetup #canPOM just for you!

For the first time ever, POM will feature tutorials. Our fantastic speakers are Jelena Vuckovic @StanfordPhoton1 and Abu Sebastian @abuseb. Register for free and be a part of POM.
#POM21ja #Photonics #Quantum #AI #phdchat #physics #free @Gradslack @FuturePI_Slack @PhotonicsMedia